Lithium-ion battery technology has improved considerably in recent years. Arkema has contributed to this with its Kynar® PVDF and continues to work together with battery manufacturers to further optimize the range, charging time and life cycle of these batteries. Their engineers are also looking into the technologies of the future. The latest from three Arkema experts: Thomas Fine, Head of battery development for technical polymers, Philippe Bonnet, R&amp;D Director for fluoride products and Dominique Plée, Scientific director in charge of batteries.

Can you remind us how a lithium-ion battery works?

Thomas Fine – The lithium-ion battery utilizes a reversible chemical reaction to ensure the flow of ions and electrons and thereby generate electrical power. Each battery contains hundreds or even thousands of cells, each one made up of three elements: a positive electrode or cathode, which is a sheet of aluminum—the current collector—coated in metallic particles that “capture” the ions and electrons when the battery is used; a negative electrode or anode, which is a sheet of copper—the current collector—coated in graphite particles that “capture” the lithium ions when the battery is recharged; and finally, in the center, a porous (to let the ions through), electrically insulated separator film to prevent the two electrodes from touching each other.

Cells are then stacked up in packs grouped together in a case, the “casing” that is placed under the car. For example, the casing in electric cars such as Tesla’s may hold several dozen packs, i.e., up to 7,000 cells.

Manufacturing of electrodes : Arkema’s know-how to improve their productivity

Manufacturers of electric batteries and vehicles are interested in the extrusion of electrodes, an innovative and very effective process.

In fact, this process increases productivity, reduces solvent use and decreases investments. A key global player in polymer transformation, Arkema masters extrusion perfectly, a key step in this process.

Lithium-ion batteries have improved in recent years: how has Arkema contributed to this progress?

Thomas Fine – Our Kynar® PVDF, a fluoropolymer which is highly resistant to high voltages and the electrolyte solvent, is widely used in lithium-ion batteries for two key functions: it is used as a “binder” to glue active particles together and on the current collector, but also as a protective coating on the separator film. Without this sufficiently resistant binder in the electrodes and without an effective protection for the separator, the ions and the electrons flow chaotically between the cathode and the anode. The separator is then highly solicited in both the charging and discharging phase with the ions and electrons following random trajectories. This results in energy loss and wear of the separator and therefore of the battery.

In a lithium-ion battery using Kynar® PVDF, the ions and electrons flow more efficiently when recharging and discharging, thus enhancing battery performance. On the separator, the high electrochemical resistance of our PVDF helps increase battery life. We have been continuously improving our grades for the past 15 years: this has enabled battery manufacturers to reduce the quantities required on the electrodes, with the quantity gradually dropping from 8% of the formulation to 1.5% today, and also to proportionally increase the quantities of active particles which attract the ions and electrons, thereby amplifying the battery’s energy density.

Kynar® PVDF is used by several lithium-ion battery manufacturers, in particular in China where Arkema responded to the electric car boom with its Changshu site which was able to produce the right grades. In particular we have been the partner of CATL—the world’s largest Chinese battery manufacturer—since its creation in 2011 and this cooperation has enabled us to continuously improve our grades for battery applications.

What other avenues are you exploring to further optimize lithium-ion battery performances?

Thomas Fine – The R&D challenge currently facing battery manufacturers is to reduce the production cost of the batteries, but above all to increase range (i.e. to exceed 400 km on the highway), to speed up the recharging time (our objective is 80% battery charge in 15 minutes) and to extend battery life cycles (i.e. exceed 1,000 complete charge/discharge cycles). Although it is still possible to improve charging times in current lithium-ion battery technology, this may cause alterations that limit the battery’s life cycle or even cause instability that may lead to combustion. Manufacturers therefore need to find the right compromise to improve battery performance while at the same time using perfectly stable materials. Our Kynar® and its excellent resistance to high voltages plays a key role in finding this balance.

Philippe Bonnet – Our R&D is also working on other materials seen as highly promising by battery manufacturers. Thanks to our expertise in fluoride chemistry, we are working in particular on new electrolyte salts (LI-FSI and LI-TDI) that are much more stable at high voltages than current electrolyte salts. They will be able to improve battery range, charging time and life cycle without any risk of implosion.

Dominique Plée – Another optimization method is to supplement the cathodes, in addition to the other carbon loads, with carbon nanotubes (CNT), which are additives that are recognized for their electrical conductivity properties. Adding approximately 2% of CNTs to the cathode formulation facilitates the flow of the electrons, and therefore of the energy, from the cathode to the anode, which enables faster battery charge. Arkema, which is one of the rare CNT producers in the world, is currently working on developing a process to purify these nanotubes so that they are free from all traces of metallic catalyst and are perfectly stable in a battery. 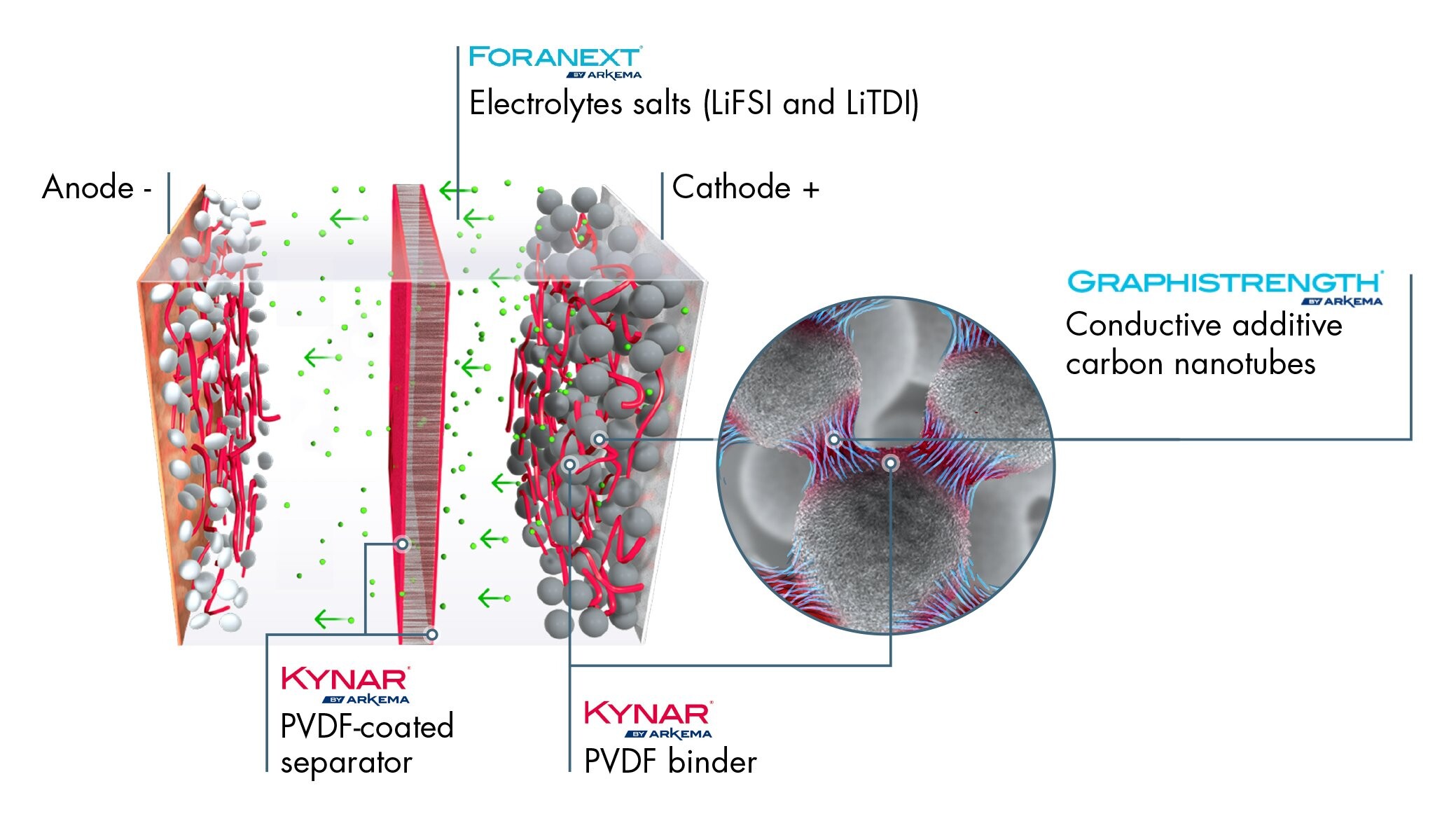 There are other battery technologies: lithium sulfur, solid-state, etc. Are you working on these technologies?

Dominique Plée – Yes, of course we have to anticipate technologies in the longer term. R&D is therefore involved in the lithium-sulfur battery in cooperation with Oxis. These batteries are not currently used in cars, but everything that flies (satellites, drones, avonics), i.e., that requires weight gains per on-board kWh, because they are lighter than lithium-ion batteries. Through its cooperation with Arkema and other partners, Oxis hopes to improve its batteries and penetrate the bulk transport market.

We are of course also looking into “solid-state” battery technology, which some consider to be a breakthrough technology and the veritable battery of the future.

Here, the liquid electrolyte—the electricity-conducting substance—is replaced with a ceramic or polymer conducting plate which would also act as separator. This technology would reduce the risk of liquid lithium-ion batteries catching fire, but above all would ensure outstanding performance: a range of 600 km or even 800 km and a charging time reduced to a few minutes. In our shared laboratory with Hydroquebec we are already looking into this technology in which specific polymers could play a key role as conducting separators and catholyte components (a blend of active material and electrolyte). At Toyota there is talk of a first model based on this technology being launched by 2025. Other manufacturers have talked of 2030. However, even if opinions differ as to when this technology will be industrialized, this will most certainly be a breakthrough in the world of batteries. In the meantime, lithium-ion batteries based on a mature technology still have a bright future ahead of them, especially as the materials that can improve their efficiency are clearly identified. If one thing is certain, it’s that a single technology will no longer meet all requirements.

Electric cars: the revolution is underway!

Car manufacturers have long seen electric cars as a niche market. Today, they seem to have taken a new approach to electrical mobility.

Back to all posts

Electric cars: the revolution is underway!