Our sites in Canada

The Bécancour plant began operating in 1986 as Oxychem Canada Inc., and, at that time, was owned by Air Liquide S.A. and Elf Atochem S.A. In 1992 the company was renamed Chemprox Chemical Inc.

These products benefit from state-of-the-art technology and are used as a bleaching agent or antiseptic agent in several industries such as pulp and paper, textiles, the food industry, mining, metallurgy and the environmental sector.

As part of continued efforts to promote employee safety and safety in the workplace, employees at Arkema’s Bécancour, Quebec, Canada site participated in a seminar on the effect of driving under the influence. Under the instruction of the SAAQ (Société de l'assurance automobile du Québec or the Quebec Automobile Insurance Corporation), employees learned about the effects of drugs and alcohol, the dangerous behavior they can cause while driving and the importance of planning ahead instead of driving impaired. Employees also tested glasses that simulated impaired vision under the effects of alcohol. The seminar and information provided was greatly appreciated by all participants. 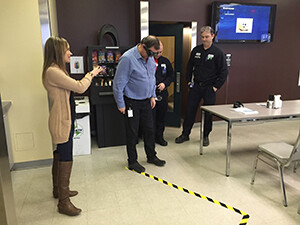 Responsible Care® is a registered trademark of the Chemical Industry Association of Canada.

Burlington, Ontario is the location of Arkema Canada Inc. sales office. Its activities here are centered on high performance and specialties products. The majority of these products involve a high degree of technical service.
Arkema Canada has been in Ontario since 1957 - first as Pennsalt, then under the Pennwalt banner and finally in our present form as a subsidiary of Arkema S.A.